Welcome to the world of Japanese tea: 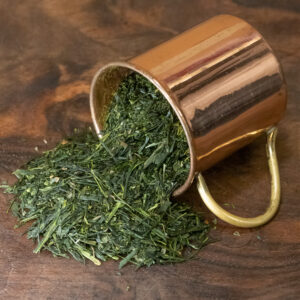 Japan was first introduced to tea in the 8th century by monks who had spent time in China studying Buddhism.  Japan showed interest in the drink but it didn’t really evolve into anything more than a stimulant that was imported from China for monks to use to stay awake during meditation.  It wasn’t until the end of the 12th century that monks, returning from a pilgrimage to China, brought tea seeds with them and planted them in the Shiga Prefecture in central Japan on the main island of Honshu.  The tea was originally cultivated by the monks for its medicinal properties.  The most interesting part of Japanese tea history was between 1641 and 1853.  During this time Japan decided to isolate itself from the rest of the world, known as Sakoku.  This meant that tea procedures worked hard to cultivate and perfect their own methods of tea production that hold true to this very day.

The one thing that really sets Japanese teas apart from other tea cultures is the use of steam.  We can thank Soen Nagatani for inventing the use of steam to dry the leaves and for creating a tea that was very different from Chinese teas.  The simplest explanation of tea processing goes like this: Steam is used to stop the freshly plucked tea leaves from oxidation.  After steaming the leaves, they are cooled down to remove any excess water.  Then they are rolled and dried using hot air.  Lastly they are pressed and rolled with more heat until they are the shape of a thin needle.

At Cup of Tea, we have three types of Japanese green teas.  Four types if you include matcha, but matcha has its own blog.

Let us begin with Sencha.  The cultivation process of Sencha has remained the same since the very beginning.  Sencha is the most popular tea in Japan and literally means “infused tea”.  Sencha makes up 80% of green tea consumption in Japan and it’s the base of a lot of other green teas, for example, add toasted rice, you get Genmaicha!  Our sencha is from Shizuoka Prefecture, the home of the mighty Mt. Fuji.  This first flush tea is sweet, refreshing, and grassy.  The highest grade of sencha is Gyokuro.  This tea is from the district of Wakayama where it is covered for 2-3 weeks before it is harvested in the early spring.  Shading the leaves from the sun activates the plant to create more amino acids, alkaloids, catechins and chlorophyll.  Thus what we have is one healthy tea.  This tea is delicate, grassy with a sweet flavor and a strong umami component.  We have two other senchas that will blow your mind, sakura sencha and peach sencha.  A must try when you really want to spoil yourself. The last type of tea we have is Hojicha.  Hojicha is the roasted version of Bancha tea.  This tea primarily comes from the leaves left over from the processing and sorting of the teas to sell or the second flush of the season.  In order to not waste any of the tea plant, the leftovers are roasted.  The charcoal roasting process that Hojicha goes through replaces the grassy flavor present in teas like Sencha, with a comforting smoothness that is both refreshing and rich at the same time.

I hope you enjoyed my little overview of the Japanese green teas we carry at Cup of Tea.  Hopefully one day you can come into the tea house and try them all out in a tea flight!

Cup of Tea is your community tea house.  If you are looking for loose-leaf tea and ways to steep it, we have everything you need. You can also enjoy a pot of hot tea, a glass of iced tea, or a custom tea latte in our shop or on the go.