What’s in your cup?

Did you know that black tea makes up roughly half of all tea consumed in the United States? Whether it’s Earl Grey, English Breakfast, Assam, Tea-Juana Chai, or Lapsang Souchong, black tea is everywhere. So what exactly makes a tea a black tea?

Like all tea, black tea comes from the Camellia Sinensis plant. What differentiates it from other categories of tea is the dark leaf color and the golden red liquid in your cup. The black color of the leaves comes from the leaves being completely oxidized. Other categories of teas, like green and white tea, are partially oxidized or not oxidized at all. Oxidation is a biochemical reaction also known as “enzymatic browning”. Like tea, it happens to foods like bananas, apples, and avocados when they’re exposed to air.

When tea leaves are crushed or curled, the interior of the leaf is exposed to air and just like a bruised apple, the tea leaf will get darker over time. If you want to stop the oxidation process, all you have to do is gently add heat. It is also oxidation that creates certain flavor variations from tea to tea. I’ll add a more detailed explanation of oxidation in a future blog!

Black tea is generally described as full bodied, malty, and somewhat astringent but smooth. However, there are many variations to black tea’s flavors depending on where the tea comes from and how the tea is dried. For example, Chinese Keemun has a mild sweetness with a hint of smokiness, Indian Assam has less astringency and a bright malty flavor, and Ceylon from Sri Lanka has a rich chocolate essence.

Despite its differences when compared to other teas, black tea still shares the many health benefits found in drinking tea. A well rounded diet should include some form of antioxidants, something black tea is extremely high in. Antioxidants help combat free radicals, which are unstable molecules that can build up in our bodies and contribute to the development of disease. We need a variety of antioxidants and the tea plant has an array of different antioxidants depending on the type of tea you drink. There are also studies that found black tea to be a potential cancer deterrent. I suppose that the conclusion here is: drink tea, it can only help! 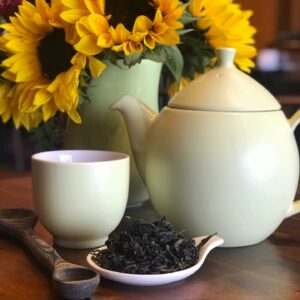 There are certain parts of the world where black tea is a daily ritual much like coffee is for other parts of the world. From China to England to the American South, you’ll find people drinking black tea just about everywhere. Black tea was spread from China to Europe, where most European countries fell head over heels for the little black leaves. America’s love of tea has remained steady even though it might feel like it’s only because of our love affair with coffee. Recent reports even show an increase in tea consumption in the US, which comes alongside studies showing that tea is a health asset and should be a part of our daily ritual as it is in other parts of the world. With so many varieties and health benefits, there’s always a black tea to help you with that craving for something warm and rich. From the fragrant Earl Grey to the smoky Lapsang Souchong, what are you craving?

Cup of Tea is your community tea house.  If you are looking for loose-leaf tea and ways to steep it, we have everything you need. You can also enjoy a pot of hot tea, a glass of iced tea, or a custom tea latte in our shop or on the go.